How do You Move a PR Firm into the future? Ask These 4 Detroit Execs

One thing you can count on when starting a business is the need to embrace and navigate change.

Staying in front of it isn’t easy. Not doing so is one reason 80% of new companies close their doors before their fifth anniversary.

But Bob Berg and Georgella Muirhead seem to have figured it out.

They are making a very big adjustment  as the Detroit-based public relations agency they started enters a new era. 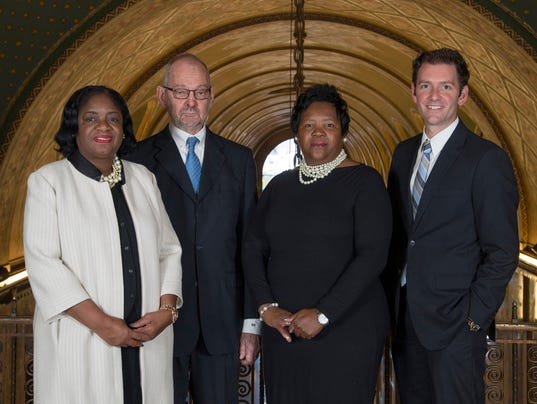 They are passing the business on to two very important colleagues, Peter Van Dyke and Marilyn Horn. Plus, they are changing the agency’s name.

The agency Berg and Muirhead started is now Van Dyke Horn.  The name change became official when the younger generation acquired the business in January.

Van Dyke serves as CEO and Horn is president of the newly christened firm they now co-own.

Cofounders Berg and Muirhead will stay on and serve “of counsel” to the agency.

It’s certainly been an interesting transition for the company.

The company’s roots go back to 1994 when Berg, a longtime PR man who did work for former Detroit Mayor Coleman A. Young and former Gov. William Milliken, decided to open his own agency.

A well-known fixture on the political and PR scene, Berg worked with Muirhead when both served under Young.

“In 1986, Bob recruited me to work for Mayor Young and that engagement effort was the beginning of a delightful and lasting friendship,” Muirhead said.

Muirhead, who did PR for other cities such as Ann Arbor and East Lansing, opened her own PR agency in 1997.

Things were rolling along for both firms when Coleman Young died.

They were tapped to help with the funeral held at the Charles H. Wright Museum of African American History, which was a huge event in the Motor City.

“It was a very intense week,” Berg recalled. “The following Monday as we were rehashing the previous week, Georgella said, ‘If we could get through last week without yelling at each other we could probably run a business together.’”

Berg Muirhead and Associates was technically born in 1998 as they joined forces.

Since then, the agency has managed projects for more than 150 clients in the public and private sectors across the region.

Meanwhile at another firm

Ten years ago, Van Dyke was doing PR for the Detroit Institute of Arts but dreamed of opening his own public relations agency.

He didn’t know much about running a business. So he decided it would be prudent to work for one and learn the ropes.

“I had two offers from two great agencies in the city, so in my final determining question to both agencies was, ‘What is your 5- to 10-year plan?’ ” said Van Dyke. “The other agency was family owned and didn’t have one; Bob and Georgella didn’t have kids in the PR field and said they looked forward to retirement. That’s when I knew Berg Muirhead was right for me. “

Horn, who worked in banking and finance, had joined Berg Muirhead years earlier to help with the company’s business side.

Berg said he and Muirhead began looking down the road, as is the case with time marching on.

“Georgella and I began talking with one another several years ago about the need to set up a succession plan to assure the agency’s continuity,” Berg said. “We approached Peter and Marilyn, who had been with us for a total of 17 years, to explore their interest in acquiring the agency. We have tremendous respect for both of their abilities and knew the agency would be in good hands if they took it over.”

They struck a deal.

“It’s rare in our business that you can transition a business to the next generation, while all principals are still around,” said Van Dyke. “To transition as seamlessly as we did, it took an incredible amount of trust and respect between the partners and between our firm and clients.

Van Dyke said they took the unusual step of changing the agency’s name.

“We knew we needed to update the agency’s brand in some manner,” he said. “As we were going through the strategy and creative process, we determined that it made the most business sense to rename the agency now. “

Through the long lens of Father Time, I asked Berg how the PR industry has changed.

“When I went to work for Gov. Milliken, there were no cell phones, no Internet, no Facebook or Twitter. We used to fax documents on a rotating drum that took several minutes to send one sheet of paper. Everything is so instantaneous these days. You have to be ready to react in a moment’s notice. At the same time, some of the basic principles of organizing and distributing information remain unchanged. “

Looking ahead, I asked Horn how she sees her agency evolving.

“I see the agency moving forward by expanding our capacity to accommodate our growth in Detroit and the industry sectors we serve,” she said.

Case in point: Van Dyke said they had worked up a financial projection plan for the year and exceeded predictions just six months in.

They are also growing and hired Dan Austin, former Detroit Free Press writer and copy editor who had been working for Detroit Mayor Mike Duggan, bringing their agency roster to 10 people.

“We are expanding in the real estate sector as well as in the community relations-public engagement service for major planning…..Full article continued below.

Source: How do you move a PR firm into the future? Ask these 4 Detroit execs

Article Name
How do You Move a PR Firm into the future? Ask These 4 Detroit Execs
Description
One thing you can count on when starting a business is the need to embrace and navigate change. Staying in front of it isn’t easy. Not doing so is one reason 80% of new companies close their doors before their fifth anniversary.
Author
Carol Cain
Publisher Name
Detroit Free Press